If you mean, are they hot?  Yes of course.  For an introduction to hot tubbing, look no further than a ski chalet or hotel to try one out, or visit a friend that has a tub.  If you want to know how hot the water in spas gets, then that all depends on what the temperature is set at.

The hot tub temperature on newer hot tubs is regulated by a digital control system, so simply entering or adjusting the temperature in the keypad is all it takes to get the heater going.  Hot tubs have both minimum and maximum temperatures as programmed by the spa pack manufacturer of the electronics.

Balboa Instruments now Balboa Water Group is one of the premiere spa electronics manufacturers in the United States.  The control systems manufactured by Balboa are used in many quality hot tub brands around the world.  Balboa can custom program a hot tub circuit board based on the manufacturer specifications and also local law.  Sometimes it is the manufacturer that agrees on the maximum temperature a particular hot tub should be able to reach, and sometimes it is local law.  In most cases that maximum temperature of a hot tub is about 105 degrees F.  That is the maximum temperature available on the keypad.  In the case a malfunction occurs and the spa water is allowed to exceed this maximum temperature, a safety mechanism kicks in and the heater will be shut off with an error message appearing on some spas called OH or Overheat Condition.

The Overheat Condition may occur because of lack of water in the spa, an air pocket in the heater tube or a failure of the spa to regulate the temperature due to other malfunction.  In any case the temperature sensor and overheat sensor in the spa will alert the electronics to shut off the heater.  This is a safety mechanism to protect the occupants of the spa as well as prevent the heater from catastrophic failure.

Generally newer Balboa systems will shut off the heater when one of the temperature sensors detects 118°F (47.8°C) in the heater.  An error message may appear such as OH, OHH, HTR TEMP LMT, HH…  At that point heating or even all spa functions may be disabled. Certainly both heater and pumps should not operate as both could increase the temperature to dangerous levels. This condition will persist until the water temperature goes below 108°F (42.2°C).

Problems that can cause this issue include some type of flow restriction, a dirty spa filter – see how to clean a spa filter – , low water level, a blocked skimmer, closed service valves (they should be all the way open), too many jets closed off (open jets by turning the ring around each adjustable jet) or circulation/heat pump not operating when it should be.

Temperature sensors can be located inside the heater as many new Balboa systems have, or they can be external to the heater such as a temperature sensor mounted in a thermowell and a high limit sensor connected to the spa pack and or to a pressure switch. 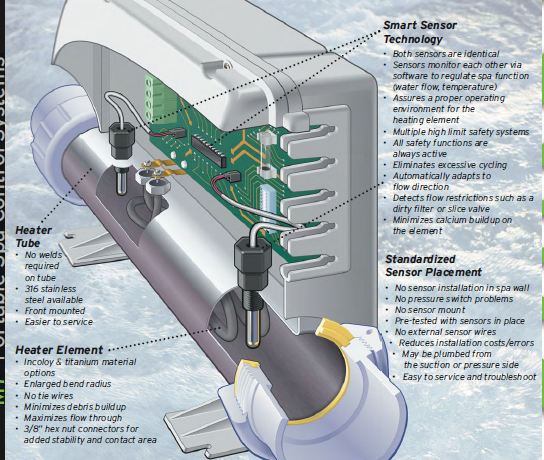 Spas also have a freeze protect function where if the sensors detect an abnormally low temperature, all of the pumps and heater will come on in an attempt to raise the temperature and prevent the spa water from freezing. This establishes the minimum temperature the spa electronics will allow.