In any infrared sauna, sweat is the result. But what is sweated out depends on which sauna is used.

Infrared saunas can release toxins stored in the body such as lead, mercury, chlorine, CO2 and SO2.  Sweating out these impurities is believed to make us feel better and become healthier.

Far Infrared comes from the sun and has been around a very long time. The reason 9.4 microns is seen as the most beneficial wavelength for the human body is because not only is that the wavelength which the human body resonates at and produces, but this is the wavelength that will penetrate the deepest – from 1 1/2″ -2″ deep.

The SpectraWave function found on the deluxe Therasauna models, can actually cycle through a wider range of micron levels for maximum benefit.

In a traditional sauna or another sauna that does not get to the 9.4 micron output, you sweat superficially and get rid of surface toxins, but not the deeper toxins. 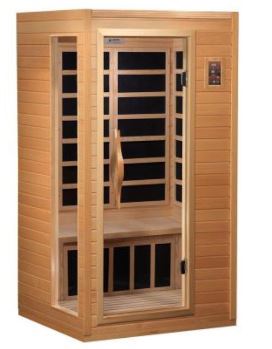 Therasauna is one of the higher priced cabins on the market due to this technology.

People will get healthier and feel better about themselves as well as look better which makes for a better lifestyle.

Invest in your well-being with a Therasauna from the Hot Tub Outpost.