The hot tub spa pack is the nerve center of the entire hot tub.   The spa pack or control box contains the wiring and circuit board necessary to control all spa functions.  The circuit board controls the heater relays, pump relays and communicates with the topside control panel.  In the hot tub business, when circuit boards have a problem they are most often replaced rather than repaired in the field.

The spa heater is mounted on the underside of the spa pack most of the time as with many Balboa and Gecko spa packs. It is important that the heater stays connected/strapped to the spa pack because it relys on the ground provided by the spa pack for bather safety.  If someone were to unwittingly decide to move the heater in the plumbing configuration without grounding it to the pack, that could pose a dangerous setup.

The functions of hot tub operation are programmed on a microchip that is part of the spa circuit board.  Programming may include the length of the filter cycles, the safety functions such as overheat protection and freeze protection, pump operation with various speed options and much more.  The spa pack controls the ozonator, pumps, light, blower, lighting and other spa components and transmits data to the topside control panel.

The old style spa control system had air switches that sent a short burst of air through a hose which triggered a mechanical switch inside the spa pack.  Newer spa control systems use digital technology and low voltage communication between the control panel and the pack. 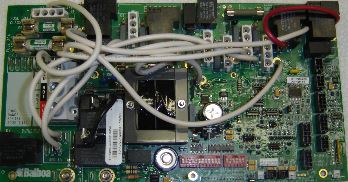 The connectors on the equipment that interfaces with the system control box may vary in type. Some are white AMP plugs while others have grey molex connectors.

When exchanging any spa component such as pumps, ozonator or blower, be aware that the new component either needs to be ordered with the same type of cord and plug as the broken component had on it, or you may be able to dismount the cord from the broken pump/blower/ozonator and reuse it with the new component (so don’t throw away the cords from any bad components).

Most of the time, replacement pumps are not sold with any cord or connector because the connections will vary from unit to unit. 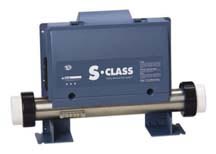 Buying a completely new spa pack may also involve buying a new topside control panel, especially if the system is a newer or upgraded one.  Note that not all control panels are the same size, so if the new control panel is larger than the old one, then the hole in the acrylic shell that holds the control panel will have to be made larger to accommodate the larger panel. 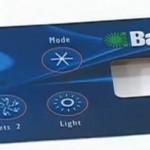 Also, the overlay is required which is a sticker with the button layout/mappings that goes over the generic buttons on the control panel to identify what button is mapped to what function on that particular spa.  Many times the overlay can be ordered along with the control panel, or it already comes with a standard one.

When replacing a spa pack which contains a flow-through heater, then make note of the heater connection dimensions. They are usually either 2″ or even 2 1/2″ heater unions that connect back up to the spa plumbing on either side of the spa pack. 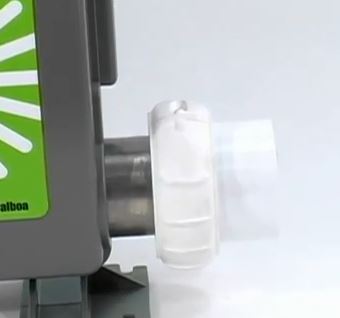 Before replacing a spa pack, it is recommended to drain the spa and disconnect all power to the hot tub.

Replacing a spa pack that is ordered to be the same size as the previous one is a matter of making sure all power to the spa is off and disconnected, marking each cable end as you unplug it either from the circuit board (newer style digital controls) or from the outside receptacles on the side of the spa pack (on slightly older digital control systems).   By marking each plug or placing a label or even a piece of masking tape denoting what each of the cords are for, it will be easier to plug them all back in.

After being sure the power is off by measuring the power leads with a volt meter, then remove the power leads which are connected to the circuit board and also remove ground wire.  The mains wires should slide back out of the hole they were put through in the old spa pack.  The power wires will need to be reinserted and the ground attached back to the grounding lug on the new spa pack.

Cord to be removed include pump cord(s), circ pump cord if the unit has a circulation pump, spa light, ozonator cord, blower cord (if the spa has an air blower), and other spa component cords.  Then open the heater unions on both sides of the pack and be aware of draining, left-over water that may flood the equipment bay. It is best to have a towel handy.  This also assumes the spa has been completely drained already.

Unscrew the old control box from the spa frame or floor. There are usually 4 bolts holding down the pack to the floor of the spa. Be sure to unplug any wires connected to the heater from any external pressure swtich or sensors.

Clean/wipe out the equipment bay and then install the new pack, plug everything back in, mount the new control panel and plug it in, secure the pack to the floor of the spa and if all goes well, the system will be operational again!  Makes sure the power leads have a good connection to the spa circuit board terminals and that the colors match up (ie. black wire to black terminal,  red wire to red terminal, white wire to white terminal, ground wire to ground lug or as per instructions for hooking up your particular spa.  Many times a schematic diagram, such as with Balboa spa packs, is located inside the cover of the control box.

When hooking up a spa, it is advised to use the services of a licensed electrician and also adhere to any local codes. Miswiring a spa can cause serious injury or damage to the spa.

Get hot tub parts, circuit boards and spa packs online. Contact us for best pricing on any spa pack or part you need. (info@hottubspatips.com)